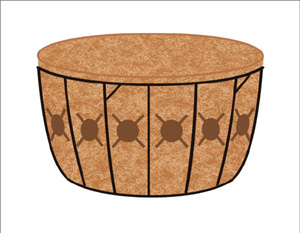 I also purchased the Pamela Crawford Plant Pillar. It was very easy to attach this basket to the Pillar. Filled with flowers and looks so pretty.

This is a great design. I have mine planted and waiting on it to flourish. Will be ordering more.

I purchased 2 16" baskets and two free standing posts. They were well packed and came with good instructions for planting. I did use different size plants; next time I will use all the same size. Also, I think it may be easier to attach the ring that holds the basket to the post before planting and then attach to the post rather than affix it after planting.

I bought five sets of disks and 16" baskets and installed them on our own 4x4 treated lumber posts in a sunny location. The instructions say to plant an astronomical 25 plants per pot. I know that 25 plants would fill in and make a nice show very quickly, but aside from being terribly expensive, I knew that the plants would become rootbound and crowded very soon. So I planted only ten plants per pot, a mixture of sun-tolerant begonias (Big and Surefire) and coleus (Main Street varieties), six around the sides (every second hole) and four in the top. It took them several weeks to fill in, but by mid-July they were looking good. By the end of July they were drying out quickly and I was watering twice a day. I was pretty happy with my first attempt at these, but learned a few things. The coleus were very rambunctious and took over the baskets, eventually becoming leggy and unattractive. Some of the branches even broke off. Well-timed pruning would probably have helped, and maybe less fertilizer. But overall, the effect was pretty nice. I am looking forward to next season and will be trying different plants.

I love my Kinsman baskets! (Sitting looking out the window at them as I write this review) They are simple sturdy pieces. Both the liner and frame have a nice weight to them and the holes in the liner were easy to use as well! 10/10 recommend!

It is a bit difficult to get the plants into the side holes. However, once that is accomplished, it looks gorgeous! And the plants actually survived the " trauma"!

I purchased one of these a few years ago and loved it. I bought this one for my Mom with the disk and mounting plate. She has a 4 x 4 and it will love great. She's excited. We need to wait for warmer weather. Thanks for the great products.

SIGN UP FOR OUR EMAIL EXCLUSIVES
Back to Top

on your next order online
when you join our email list